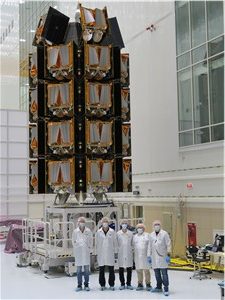 In late-August, another 34 OneWeb internet satellites were separated from the Soyuz launch vehicle and placed in orbit with a dispenser from RUAG Space. With this, RUAG Space has successfully placed 997 satellites in orbit, bringing the Swiss-based space supplier closer to the milestone of 1000 satellite separations. “This is a huge achievement which highlights the outstanding capabilities we have in satellite separation,” says Holger Wentscher, Vice President Product Group Launchers at RUAG Space. “We meet customer expectations in extreme environment”

The separation systems from RUAG Space are being manufactured at its site in Linköping, Sweden. The dispenser system makes it possible to separate multiple satellites in a specific order in order to put each one in exactly the right orbit. “For us, every separation is an exciting achievement. We can offer a 100% reliability and are able to meet customer expectations in the extreme environment of space,” says Holger Wentscher.

RUAG Space has been developing and producing Payload Adapter Systems for around 40 years, says Andreas Jonsson, the site manager in Linköping. “Our latest product ‘Soft Separation System’ makes our separation systems useful for the next generation satellites with better performance and lower shock.”

RUAG Space says it is the world leader for satellite separation systems for commercial launch vehicles. “Our separation systems ensure that satellite and rocket remain securely attached to one another during the tough journey into space, and then deliver the valuable payloads into orbit with precision,” says Andreas Jonsson. All 997 satellite separations have been carried out with a 100 percent success rate. They are the result of a long and trusted collaboration with NASA, the European Space Agency (ESA) and an increasingly advanced position in the commercial space industry in recent years.