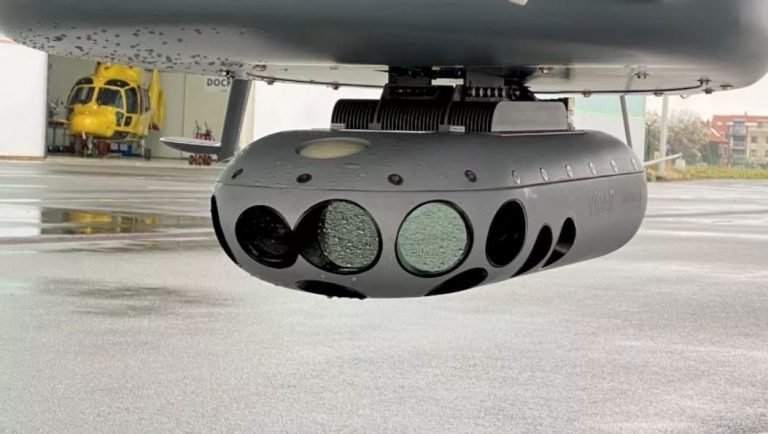 In October Melbourne-based Sentient Vision Systems’ new ViDAR VMS-5 pod was instrumental in locating a rubber boat containing 24 immigrants that had been adrift for 48 hours in the English Channel. ViDAR stands for Visual Detection And Ranging; the pod employs Artificial Intelligence to examine every frame in an EO/IR imagery stream to find hard-to-detect targets in bad weather and sea conditions. The VMS-5 pod equipped a Diamond DA42 MPP light aircraft operated in partnership with North Sea Aviation Services (NSAS) which was on a demonstration mission to Belgium’s Maritime Rescue Coordination Centre (MRCC).

For this demonstration the ViDAR pod had five EO/IR and eight Long-Wave IR sensors with a combined Field of View of 180 degrees. From an altitude of about 1,500ft and at an airspeed of 90kt, if the target is within the sensors’ field of view ViDAR will spot it in the imagery feed in conditions up to Sea State 6 with a 96% probability of detection on the first pass. It enables an airborne search platform to cover a designated area up to 300 times faster than one without ViDAR.

The DA42 was tasked with the mission at extremely short notice because no other air assets were available to the MRCC at the time. But as the aircraft had demonstrated its Search and Rescue (SAR) capability very successfully the day before, the Director of the MRCC allowed the DA42 to be tasked with the mission. The aircraft was airborne within 10 minutes and thanks to the ViDAR VMS-5 pod the missing boat and its 24 occupants were found within 20 minutes.

Announced at the 2021 Dubai Air Show, the new Centre of Excellence introduces the ViDAR pod family for a range of civil and military SAR and Intelligence, Surveillance and Reconnaissance (ISR) applications.

As reported in EX2 last week, Adelaide-based Silentium Defence has secured a $3.2m contract from…