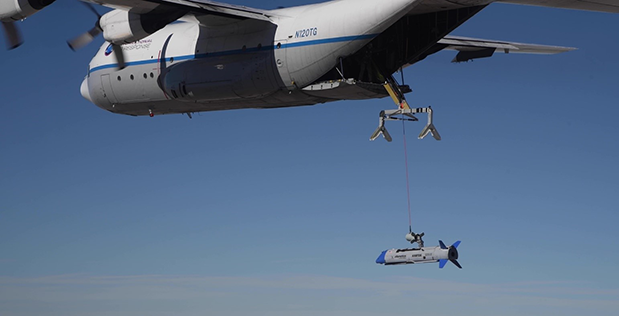 The GAV is being developed by US firm Dynetics, a wholly owned subsidiary of Leidos.

“This recovery was the culmination of years of hard work and demonstrates the feasibility of safe, reliable airborne recovery,” said LTCOL Paul Calhoun, program manager for Gremlins in DARPA’s Tactical Technology Office. “Such a capability will likely prove to be critical for future distributed air operations.”

During the final experiment, the team refurbished an X-61 vehicle and conducted a second flight within 24 working-hours. In addition, many hours of data were collected over four flights including air vehicle performance, aerodynamic interactions between the recovery bullet and GAV, and contact dynamics for airborne retrieval. Unfortunately, one GAV was destroyed during the flight tests.

“Airborne recovery is complex,” said Calhoun. “We will take some time to enjoy the success of this deployment, then get back to work further analyzing the data and determining next steps for the Gremlins technology.”

Safe, effective, and reliable air recoveries promise to dramatically expand the range and potential uses of unmanned air vehicles in conflict situations. The GAVs can be equipped with a variety of sensors and other mission-specific payloads. They can also be launched from various types of military aircraft, keeping manned platforms safely beyond the range of adversary defenses. After air retrieval, the GAVs can be refurbished by ground crews to prepare them for another mission within 24 hours.

A $3.5 million Australian Army project to develop a convoy of autonomous trucks that use…

The AUKUS partners – Australia, the United Kingdom and the United States – have signed…