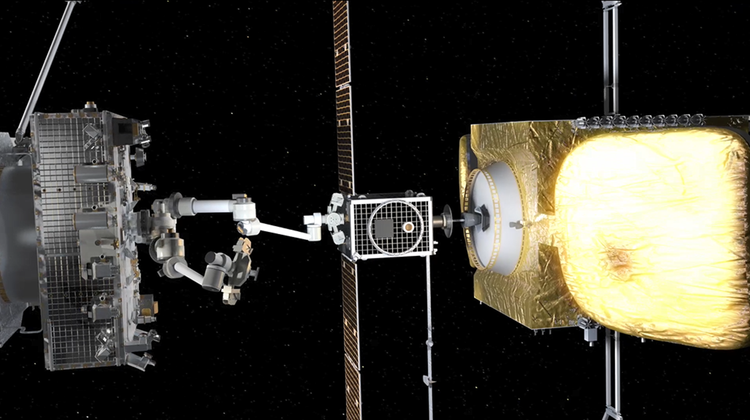 Under the launch agreement, SpaceX will launch the MRV and several MEPs in early 2024. Optus, Australia’s largest satellite owner and operator and a bidder for Defence’s MILSATCOM program, JP9102, will be the launch customer for the MEP. It intends to install one on its D3 satellite in 2025. The 1,188kg D3 was launched in 2009 and operates primarily in the Ku band

The launch of the MRV and MEPs herald a new era in on-orbit satellite servicing: this is the first time a robotic-capable spacecraft will provide persistent robotic servicing capabilities in geostationary orbit (GEO). The MRV will perform a series of on-orbit tests of its robotic-arm payload as it carries out its primary mission, installing MEPs on commercial satellites. The MEP, a small customer-owned, customer-controlled propulsion augmentation device, can provide six years of life extension for a typical 2,000 kg satellite in GEO.

“Optus’ partnership with SpaceLogistics will leverage their cutting edge MRV and MEP capability to increase the life of Optus’s D3 satellite,” said Ben White, managing director, wholesale, satellite and strategy at Optus. “This innovative move along with the future launch of Optus 11 will benefit our customers”

SpaceLogistics’ award-winning, first-generation Mission Extension Vehicles, MEV-1 and MEV-2, have provided propulsion and pointing control to commercial satellites in GEO since 2020. The sophisticated robotics of the next-generation MRV will expand the services SpaceLogistics currently offers to include augmentation, detailed robotic inspection, relocation and repair.

“Satellite owners are demonstrating enthusiasm and confidence for our life-extension solutions and the potential cost savings they could provide,” said Vice President of Business Development for SpaceLogistics Joseph Anderson. “Our Optus contract represents our third service contract with commercial satellite providers, and with several signed term sheets in queue our installation manifest for MEPs is already full for 2025 and nearly full for 2026.”

SpaceLogistics is the global leader in the development and deployment of on-orbit satellite servicing systems and the first and only company performing on-orbit servicing for commercial GEO satellites.

Melbourne-based RUAG Australia has been awarded full patent rights in Australia, Europe, the USA and…