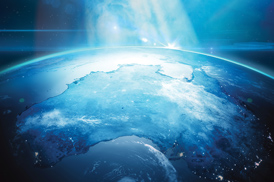 Defence has confirmed that a Space Division headquarters will be established within the Royal Australian Air Force in early 2022. The new division will be led by Air Vice-Marshal Catherine Roberts, AM, CSC, who will take the reins in January.

“We use Space daily for understanding the weather, navigating, access to geospatial information and sharing information across Australia or across the world,” AIRMSHL Hupfeld said.

AIRMSHL Hupfeld noted the government’s commitment to invest approximately $7 billion in space capabilities over the next 10 years, helping to facilitate access to space, space services and geospatial information.

“Defence will need capabilities that directly contribute to outcomes in space as a contested domain, however this does not mean that Defence encourages the militarisation of space,” he continued. “All space operations are conducted consistent with international and domestic legal obligations.”

AVM Roberts currently serves as Head of Air Force Capability, responsible for conceptualising and shaping the future requirements of the RAAF.

The COVID-19 pandemic has forced the cancellation of the 2021 Avalon air show, which had…