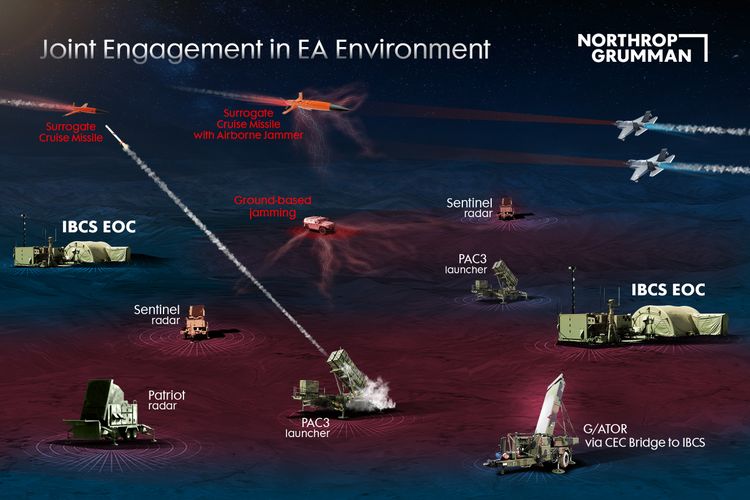 During a sophisticated flight test of the US Army’s Integrated Air and Missile Defense Battle Command System (IBCS), developed by Northrop Grumman, data from Army, Air Force and Marine Corps sensors and weapons systems have been fused on a live network.

This capability demonstration enabled operators to connect any sensor with the best shooter to see, track and intercept a cruise missile target, despite a highly contested electronic attack environment that jammed some of the radars would have otherwise denied the intercept. In addition, IBCS shared target flight track data with a Navy C2 system during the event.

The flight test was another in the system’s long series of successful intercepts, but it was much more: It was proof of the Joint All-Domain Command and Control (JADC2) capabilities inherent in Northrop Grumman’s modular open systems approach (MOSA) to C2 architecture – capabilities crucial to US Department of Defense (DOD) preparations for the battlespace of the future.

In that not-too-distant future, adversaries will threaten with advanced weapons from every domain – land, air, sea, space and cyberspace – and from every direction, all at the same time and potentially at hypersonic speeds. To prevail, it’s now recognized by militaries across the globe that stand-alone networks must be more integrated to enable command and control of the full battlespace across domains and services. That connectivity will allow them to perform as a joint force, coordinating defense and strike strategies and saving every precious second.

“What we demonstrated during the July flight test is the capacity of our approach and architecture to integrate multi-domain systems across the services,” said Mike Foust, a Northrop Grumman engineering fellow and Integrated Air and Missile Defense chief architect. “We’ve already proven joint-force connectivity and shown the path to future Joint All-Domain and Command and Control.”

Among Northrop Grumman’s solutions to the broader demands of JADC2 is the innovative Joint Integrated Fires Command, Control and Communications system (JIFC3). It uses as a foundation the resilient, extensible MOSA architecture and incorporates new tools to help commanders quickly coordinate, deconflict and synchronize defensive and strike firing of missiles and other assets.