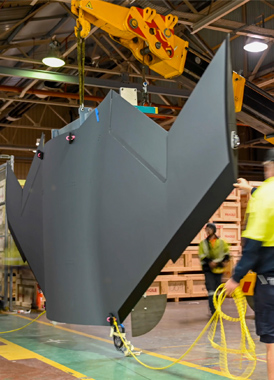 Experience in advanced robotics, composite materials and digital engineering enabled the Fishermans Bend site to take an innovative approach to the creation and production of the military development program.

“We approached the design of the air vehicle and production system together with a “design for cost” philosophy,” said Andrew Glynn, director of Airpower Teaming System Vehicle Design and Production. “While we’ve developed a clean sheet design featuring many new technologies, we’ve also made smart decisions by incorporating off-the-shelf components and leveraging digital engineering to optimise both speed-to-market and design producibility.”

“By collaborating with our Australian industry team, including RUAG Australia and Ferra Engineering, throughout the design process we’ve been able to incorporate ‘design for manufacture’ features across all air vehicle components and sub-systems,” he said.

The 11.7m long uncrewed aircraft, designed to fly and fight alongside crewed assets, is Australia’s first sovereign-designed and produced military combat aircraft in over 50 years.

That first aircraft rolled out of the Melbourne factory in May 2020, which is also home to Boeing Aerostructures Australia and Boeing Australia’s R&D facilities. The site called on its roots from heritage companies Government Aircraft Factory and Commonwealth Aircraft Corporation as well as its commercial airplane experience to design the air vehicle and production system.

“To achieve this, we have designed all components to have pre-drilled holes by our suppliers at the sub-component level, allowing the final assembly to snap together without the need for any manual drilling in the factory.

The team also realised the benefits of additive manufacturing, printing a large number of flyaway parts on-site to help support rapid insertion of the prototype aircraft and adoption of digital engineering.

“It’s a nod to Australian innovation and a credit to our small co-located team of experienced aerospace professionals and multi-skilled engineers, who have been able to solve problems and contribute to rebooting Australia’s defence aerospace manufacturing industry,” said Glynn.

Boeing Melbourne will continue to support the design, composite component manufacture and development of the program, with the final assembly of the Airpower Teaming System to commence at the Wellcamp Defence and Aerospace Precinct by the middle of the decade – pending orders.