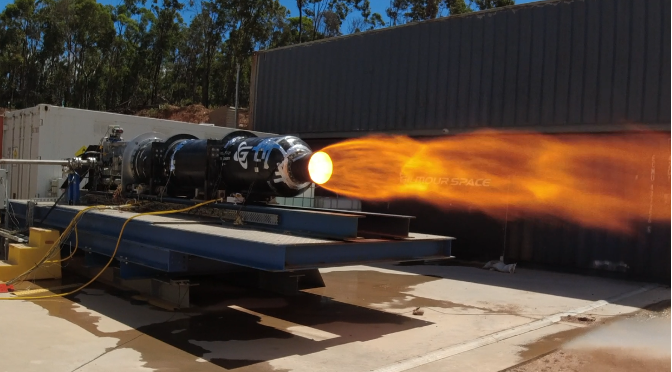 Rocket engineers at Gilmour Space Technologies have successfully test-fired a 110-kilonewton rocket engine, the most powerful ever developed in Australia.
The 75-second test was a major milestone for Gilmour Space, which is developing Australian-made rockets that will, over the next five years, be capable of launching 300- to 4,000-kilogram satellites and payloads into low earth and other orbits.
“What you see here is the main engine that will power the first and second stages of our three-stage Eris rocket to space,” explained company CEO, Adam Gilmour. At just over 110 kilonewtons (or 25,000 pound-force) of thrust, the test generated enough force to lift four SUVs off the ground — a significant demonstration of space and launch capability by an Australian SME.
“It was a successful test. We achieved our expected full thrust of 110 kN over the 75 seconds, and our team will be moving on to the final engine qualification campaign next month,” he added.
Strategically, the test was also a demonstration of Australia’s first sovereign launch capability. “It is no small thing to say that we’ve developed Australia’s largest rocket engine; and that it could have significant flow-on benefits for the commercial, civil and defence space sectors,” he added.
On where and when Eris will be launched, Mr Gilmour said the company was currently seeking approvals from state and federal government agencies to green light a small orbital spaceport at the Abbot Point State Development Area in Bowen, North Queensland.
“With timely assessments and approvals from relevant authorities, we hope to be able to launch Australia’s first sovereign-made rocket from Queensland sometime in the latter half of 2022.”